Small space living is not new. Here in Malta, post war, it was not uncommon for people to live in very small spaces, or even in a room; often ‘kerreja’ were rented within a tenement, with a number of people living in what amounted to nothing more than 10 square metres.

Other cities boast similar small spaces – Paris for instance has its ‘chambres de bonne’, small apartments generally found on the top floor which were used as bedrooms by the family’s domestic staff, but today, are usually the cheapest rung on the Parisian letting market.

However, the modern microspace is unique for being a highly designed space, one where room to move may be at a premium, but where the design spec is high. Rather than being the cheap option, it can be considered choice for those looking for an upscale lifestyle that is low-maintenance, eco-friendly or both.

‘There’s a general environmental awareness in reducing the carbon footprint – a responsibility to consume and own less,’ says Elisa Grech, architect from MODEL who recently created the two apartments pictured here. ‘How much space do we need to store our personal items; most of which we might not necessarily need? Thus “less is more” is not only relevant to minimal design aesthetics, but is also a lifestyle concept which nowadays people are more conscious about.’

Adds Simon Grech, also from MODEL: “We overestimate the amount of space we require to be comfortable. When living in a small space one has to understand that the relationship between human and object becomes ever more relevant and intense, as there is an overlap in the space they both occupy when both in movement. There has to be an understanding and design of negotiation between the biological and non-biological. Living becomes proactive through action; there’s no space for procrastination and sedentary living. Living becomes a dance, although physically demanding, enjoyable and mindful.’

To the rear left of the dwelling, a full-length mirror slide to reveal a toilet and washbasin, and to the rear right, a shower room in contemporary slate colours balances the floorplan. The staircase up to the sleeping quarters is located at the back of the dwelling. Fabricated in black bent steel sheeting to blend with the frame of the cube, its twists echo the turns of a traditional Maltese stone garigor. Sweeping upward to a king-size bed, this sleeping platform on top of the living and kitchen areas allows an uninterrupted view of the stars at night through the fanlight window

In a compact residence, a floating sculptural staircase hangs like a lantern from a double-height ceiling, connecting a ground floor living/kitchen/dining area and a first floor reading nook and bedroom.

Extending four metres up through the heart of the property, the custom staircase structure is anchored by a slimline perimeter frame. Its interior spiral form is fully wrapped in white steel mesh which allows light to travel throughout. Safely cocooning the user as they make their way up or down, its perforated volume filters daylight into the stairwell and through to the kitchen behind it. By night, it illuminates the ground floor areas with a softly diffused glow

To the rear of the property, a kitchen with Carrara marble countertops and open shelving spans the width of the back wall. To its left, a generously proportioned bathroom with original floor tiles and a soft grey colour palette is an exercise in simplicity

Most microspace are rented. ‘The design of these microspaces in particular is very functional, which is one element which makes them so popular,’ says Thomas Cremona, founder of property management company Casa Rooms. ‘If you’re organised, they’re easy to manage because they’re extremely low maintenance. The people renting out these spaces are young, single professionals and the spaces are not necessarily less expensive than larger spaces. It’s more about the design and finish. You can get a larger space that isn’t as nicely done and these clients are going to opt for the smaller space because it’s more functional and suits them better to live there.’

In Malta, it is Valletta that is attracting this kind of development. ‘People want to rent in the city, sometimes regardless of the size of the space,’ says Thomas. ‘These apartments have high ceilings and large windows so they do have features that are typical of Valletta, which is also a deciding factor.’

Says Elisa: ‘With its rich charm and history, the capital city makes for one of the most desired rental locations. In general, there’ an increase in demand for rental spaces, which may be attributed to the influx of foreign nationals for an undefined period of time.’

What it is like to live in such a small space? ‘The truth is when you are given a limited space you learn how to adapt to it and base your daily routines and functions around it,’ says Elisa. ‘There are pros and cons – you can’t host a dinner party but then you don’t have to spend a lot of your time cleaning. If you love food, you don’t have the space to cook on a big scale, but then you save on kitchenware, food and electricity, which you can spend on exploring restaurants instead.’

From a design perspective, designing a truly functional space this small is a tour de force of architecture. ‘It is not about the quantity of square metres, but rather the quality of space per square metre,’ says Simon.

‘One has to think about the resident’s day to day functions and routines, and how best to communicate them within the space,’ continues Elisa. ‘In such tight spaces clutter is your worst enemy. It’s important to create as much storage as possible and to have a location to store day-to-day items when not in use. When designing, it’s important to keep in mind a day-to-day program and a clutter-free, organised environment.

‘The key is to allocate just about the right amount of are for each room. When designing within the parameters of an existing fabric, the focus is shifted into fitting functional installations to a high level of detail which assist making day to day life easier for the user.’

To the rear of the property, a kitchen with Carrara marble marble countertops and open shelving spans the width of the back wall. To its left, a generously proportioned bathroom with original floor tiles and a soft grey colour palette is an exercise in simplicity

Adds Elisa: ‘Detailing custom-made functional installations usually work out at a premium. There’s a challenge in utilising honest simple materials for complex functional structures. On a long term basis this investment usually pays off, given the quality of the space achieved within a small space.

‘Another important challenging aspect is respecting the existing fabric of the space, especially when dealing with properties within a historical context. Reversibility is key. There might be a point where the necessity or appeal of small spaces decreases, which would leave us with a multitude of one bedroom apartments. I think both architects and contractors alike must be aware of this risk and be able to revert these spaces so that their usage can change.’ 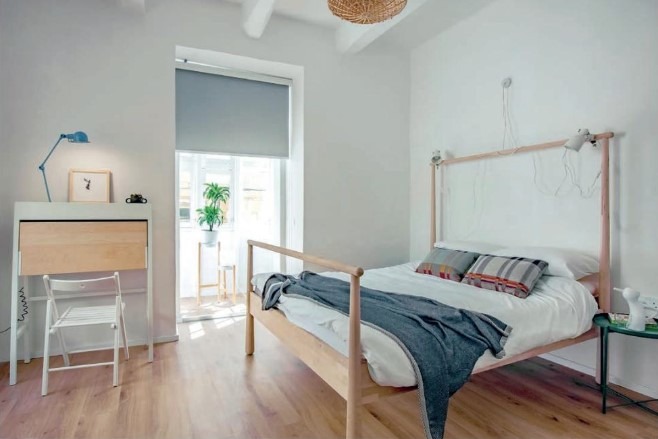 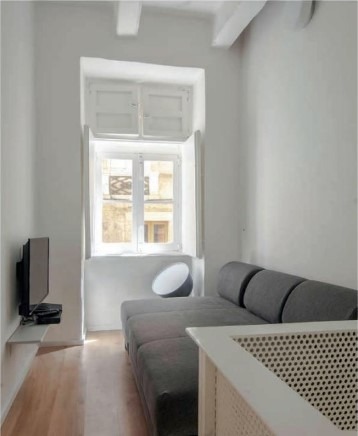 On the first floor, the staircase leads directly into an intimate reading space with contemporary and a view out through restored apertures. The bedroom, just off the landing, features warm birch flooring underfoot and simple white walls. A traditional Maltese gallerija extends the room out into the quiet streetscape and floods the room with light