This penthouse started with a view. It determined everything about the apartment, from the orientation of the building to the design of the interior and the materials used within. This singularity of purpose is quite understandable as it is a quite wonderful vista – the ever-changing sea and in the distance St Paul’s Island.

The apartment was designed by architect Alan Galea from MODEL, who, together with Andrea Vassallo Cesareo from CVC Architecture, built the entire building. ‘The view is breath-taking and it keeps changing because of the sea,’ says Alan. ‘In summer it was flat, like a lake, but with lots of boats crossing. At this time of year, it’s often stormy, with waves breaking against the rocks.’

The view takes centre stage as soon as one enters the apartment, the eye immediately drawn across the open-plan living area that includes the kitchen and dining area to the expansive terrace that is framed by a steel balustrade which fades into the surroundings. ‘The steel mesh railing is very strong but so slim you can barely see it when looking out and it gives a nautical feel,’ says Alan.

Open-plan living space: The main room in the apartment is dominated by the view, with the sofa oriented so the sea can be enjoyed when seated. The television sits on a plinth that extends beyond the bank of the wall storage that conceals the TV’s paraphernalia, as well as the chimney fireplace

Dining: The black-stained oak entrance opens up into the light of the apartment’s main living space. Along one wall is a bank of more storage but with a long shelf set within it, giving space for artwork and other personal touches. At the far end, a marble topped dining table is teamed with black chairs that tie in with the black of the kitchen units

Kitchen: The brightness of the room is countered by the kitchen units in stained black oak. The island, made of the same marble as the floor, but in a different finish, contains the hob and sink, so that the chef can enjoy the view, and be part of the conversation with others while rustling up a meal 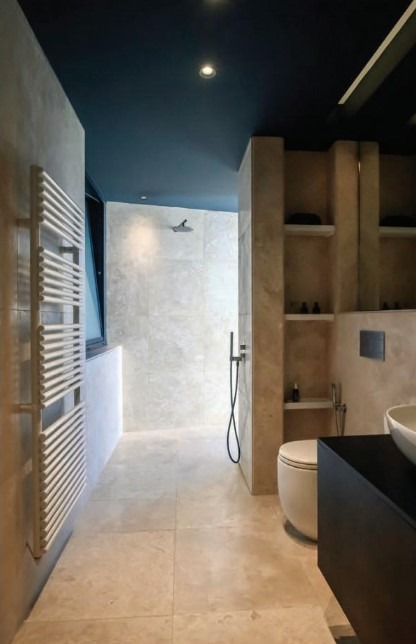 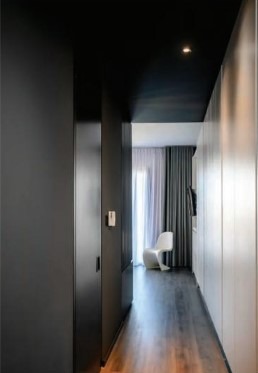 Right, corridor: Leading to the master bedroom, the corridor includes a wall of storage

Left, ensuite bathroom: Made from stone, this bathroom is a relaxing and stylish space

At 280 square metres, the interior of the apartment is very spacious. ‘As we had the luxury of space, we didn’t have to maximise every last centimetre which gave us the edge when designing and allowed us to make the most of the view,’ says Alan. ‘The sofa has been placed so that it faces out, and in the kitchen, the sink and hob are on an island so that when cooking, the homeowners can still look out.’

Neutral shades make up most of the colour palette but this has been given depth with contrasting black stained oak. ‘The apartment is extremely bright so when we were deciding on the colours we opted for darker colours in the areas where you wouldn’t spend much time such as the hall and corridors,’ says Alan. ‘The kitchen units are also black stained oak and this is where the transition happens between light and dark as anyone spending time in the kitchen will have their back towards the dark and their face towards the light. This really reflects the energy of the space and the experience of living in it.’

The brightness of the apartment is largely down to the floor-to-ceiling glass that takes up two walls of the room ‘and because there is so much glass, there was little space for the personal touch; it was a challenge to create it,’ continues Alan.

The solution is a long stretch of shelving that sits neatly within one entire wall of storage and which gives space fore artwork and table lamps which introduce warming pops of colour, as well as breaking a flat expanse of units.

Most of the materials used in the interior are natural with marble on the floor along with the black-stained oak in the kitchen. ‘Using natural materials fits with my philosophy,’ explains Alan. ‘But as well, with a view that does not include buildings and below a large green enclave, it feels as though the apartment is in nature and I wanted to continue this mood by using materials such as stone, marble and wood. Plus natural materials age with the building making them more timeless.’

Child’s bedroom: Pretty in pink, an all in one bed and storage unit creates a cosy place to sleep

The property took three years to build and had a difficult beginning. ‘The building sits on rock which moves independently in three areas so it was challenging to find a way to build on it,’ says Alan. ‘Without getting too complicated, the solution was a large platform which absorbs movements.’

It was definitely worth the energy invested, though. ‘The homeowners have been here for three months and they tell me it still feels like a dream,’ says Alan. ‘It is everything they hoped for.’